Home » Blog » Why Should You Use a Rifle Scope – 6 Reasons 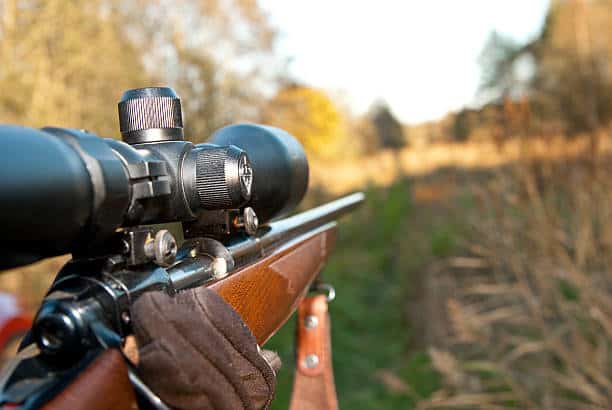 Long gone are the days where only professional snipers use rifle scopes! More and more hunters are equipping their Ol’ Betsy with a nice and shiny rifle scope.

Why you may ask?

Because there are so many benefits to it and literally zero drawbacks.

In this article we’ll be exploring the question of why one should use a rifle scope, we’ll be naming all the pros and we’ll try to explain each and everyone to the minute detail!

First of all, we would like to take a short moment to first define and take a closer look at the rifle scope itself.

A rifle scopes main utility is magnification. It helps you get ‘closer’ to your target without actually having to be there physically.

The way a rifle scope works is quite simple: Incoming light is captured and shone through one point of the scope, the focal point. After that, it’s stored, inverted and then sent to the magnifying glass, promptly situated near the magnification ring.

The end result is a magnified picture of your target!

Rifle scopes are usually stratified into three types, depending on which group of people uses it.

We have: Tactical scopes, sniper scopes, and hunting scopes.

Sniper scopes are simply scopes used by the military, there’s little difference between those and hunting scopes.

Hunting scopes are usually more sturdy than all the other ones named, as they have to endure all the harsh environments, hunters, themselves in.

We’ll mostly concern ourselves with hunting scopes as we’re a website dedicated to all things hunting, the benefits and examples listed below are all related to the hunting scope.

Now that we have the basics covered, let’s name some of the benefits of using a rifle scope.

1) Allows you to get up close without being there

Hunting is a hobby for a lot of people, but many don’t realize the dangers of it unless they experience it on their own skin. You don’t want to end up in a situation where the predator becomes prey and vice versa.

Commonly hunted animals such as deer or wild boars act unpredictably and you’re never too safe when you’re sauntering around their areas.

When startled, some species go in full on flight or fight mode, the latter one being the dangerous option of the two. If that ever happens to you and it has happened to some of our hunters, you better make that shot or it might very well be your last one.

That is why the rifle scope has become so popularized in the hunting sphere, it allows you to get a good ‘grip’ on the target, without actually notifying the animal of your presence.

2) Trains you to become a better shooter overall

Forget the game for a moment and realize that shooting itself is a veritable endeavour. When you equip your rifle with a scope, it immediately boosts your self-confidence and morale. This leads to hunters taking shots they would never even dare take under any other circumstances. Yes, one might say that they miss more in the beginning, but with time, accompanied by your rifle scope, your shots will improve.

Remember the old saying by Michael Jordan that goes: ”I’ve missed more than 9000 shots in my career. I’ve lost almost 300 games. 26 times, I’ve been trusted to take the game winning shot and missed. I’ve failed over and over and over again in my life. And that is why I succeed.”

You will only ever improve in something if you start by failing at it. It’s important to front-load all of your patience, pride and will into those first 100 shots, after that, you’ll see yourself improving immensely!

It’s almost extraneous to even mention this in the article, it’s quite logical that with a rifle scope, your accuracy as well as your sphere of hunting will massively increase!

We just wanted to remind everyone of that, as now you can not only plan your shot for much longer (the moment an animal feels threatened, it will either flee or fight), you’ll have a lot more success.

Furthermore, now you don’t have to risk your own life or the life of your trusty companion (hunting dog), as you can take shots from afar, like a true sniper.

Magnification allows you to get up close to your prey, the windage knob lets you play against your natural enemy and by tinkering with the ocular lens, you get a crisp and clear picture of your target.

What more could one ask for?

4) Have an edge over other hunters

Let’s not deny the fact that hunting is just done for sport. Whenever there’s a group of men involved, there will be some natural and hopefully healthy competition going on.

By equipping a scope to your rifle, you’re already at a massive advantage to anyone not having one, as it allows you to shoot from places and distances others could only dream of!

You’ll also have a lot more precision with your shots (especially if you have taken as many shots as Michael Jordan did) and you’ll surely be the one bringing home the bacon for the day!

5) A rifle scope is a tool of comfort and relaxation

Hunting can be very stressful, especially if you have to constantly watch your back for potential dangers such as a wild boar going ham.

A rifle scope let’s pick out a spot, have a view at the entire landscape and pick your own shots.

It allows hunting to become a relaxing and enjoyable activity, something akin to fishing, as you’re now in control of what is transpiring in front of you.

Additionally, if you have eye problems or are wearing glasses, a rifle scope comes in as a perfect tool of combating your sight issues. Simply magnify the target you’re aiming at and you’ll land your shot in no time.

Also, get new glasses or try contact lenses, they help out a lot, we’re speaking from experience.

6) Rifle scopes can (and have) saved lives

We’ll tell you a story that transpired when one of our hunters went hunting on his own. It was a dark and foggy night, he was equipped with a simple rifle and a scope that had night vision incorporated into it. It also had artificial lightning to combat these moonless and starless nights, just the one we’re talking about.

The hunter was tired, he had his last coffee at noon and midnight was now well on its way. He wanted to go home, when he heard some thumping in the distance, around a 100 yards away. Sharp were his senses and with a glee in his mouth, he pointed the rifle with the mounted scope at the target. As he zoomed in on the target, he almost got a heart attack as he was already prepping himself to shoot the prey. Good thing he had a rifle scope installed or he could have very well killed another hunter, his best friend and acquaintance!

Now imagine the same situation without a rifle scope, would you have taken the shot?

Most wouldn’t but some invariably would, especially considering the psychological condition our hunter found himself in.

The good news is that scopes are now widely available on sale and that one should ALWAYS have a scope with him. It should be a prerequisite for hunting, at least that’s the point of view we have adopted after hearing this weird and whimsical story as told by the man himself.

We believe that rifle scopes are an essential tool when it comes to hunting, insomuch important as the rifle itself.

We’ve seen what all the benefits are, mainly the confidence, self-reliance, safety, long-distance shooting, accuracy to just name a few.

With rifle scopes becoming popularized in the hunting game, more and more manufacturers are joining in the fray and with that, prices are being lowered by the day, meaning that most anyone can nowadays afford himself a rifle scope.

With that being said, we hope that you now recognize and understand the benefits of having a rifle scope and that you’ll always have one by your side, if not for your own safety, then for the safety of others.

Remember to stay safe out there and happy hunting!