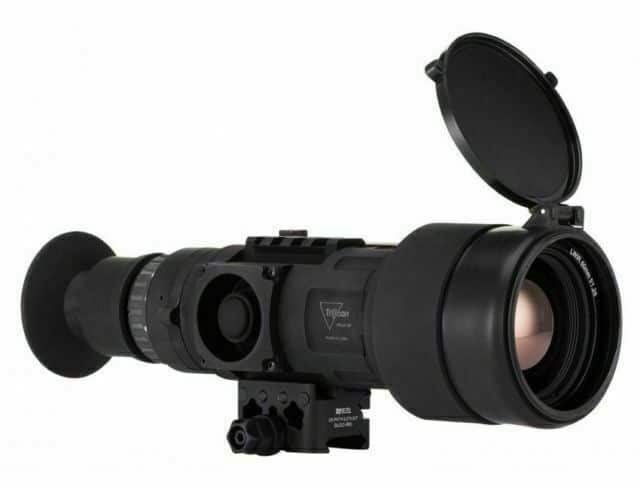 A thermal scope combines infrared technology with rifle scope capability. The main advantage is that it improves your target’s visibility, allowing you to spot it at night or during the day in low-light situations.

A thermal scope creates pictures or thermograms using infrared light (which is why it is also called an infrared scope or IR scope). Hot items appear brilliant in a thermal image, whereas cold things appear dark. This is due to the fact that it displays varying degrees of heat. Animals, people, and motorized equipment produce a lot of heat, whereas inanimate items such as plants, buildings, and water produce a lot less.

Let’s explain how a thermal rifle scope works, how it differs from night vision, what you can do with one, and what traits to look for when purchasing one.

How Do Thermal Scopes Work?

Time to travel back to middle school science class and learn about the electromagnetic spectrum to better grasp how a thermal imaging scope works.

The energy of light moves in waves. On one hand, there are low-energy long waves such as radio waves. Short waves, such as gamma rays, on the other hand, have a lot of energy. Visible light is in the middle, followed by infrared light, which has slightly longer waves.

Near-infrared, mid-infrared, and thermal-infrared are the three categories of the infrared spectrum, which is invisible to the naked eye. The first two terms refer to light that is reflected, whereas thermal infrared refers to light that is emitted by an object, i.e. heat.

Thermal scopes are equipped with detectors that focus on thermal infrared light, and then the gadget develops a thermogram, allowing you to perceive the object’s form as it relates to heat, according to ATN, an electro-optics manufacturer.

Thermal imaging, in its most simplest form, allows you to see an entity’s heat radiating off of it. Thermal cameras record the temperature of various things in the picture and then assign each temperature a color shade, allowing you to observe how much heat it emits in comparison to the objects surrounding it.

Warmer temperatures are generally allocated a shade of red, orange, or yellow, while colder temperatures are often assigned a shade of blue, purple, or green. For example, the figure in the image at the top of this piece is coated in colors of red, orange, and yellow, with blue and purple in other locations. This is due to the fact that she emits more heat than the items around her.

Instead of color, some thermal cameras employ grayscale. Greyscale is used by police helicopters, for example, to make suspects stand out.

Thermal imaging has several unique advantages over visible light imaging because it uses heat as a light source. There are a few drawbacks as well. To begin with, any object that is warmer than its surroundings is an infrared light source. This includes warm-blooded animals, which may appear counterintuitive at first.

Infrared light interacts with diverse materials in a different way than visible light. It is reflected off of glass and other clear plastics that do not filter visible light, such as Plexiglas. Other metals in this category include aluminum and silver. Other materials, such as smoke, fog, and some polymers, allow heat to travel through with ease.

The infrared section of the light spectrum encompasses a far larger range of frequencies than the visible portion of the spectrum, therefore different frequencies of infrared light have different characteristics. Because of its longer wavelengths, infrared light can penetrate certain materials that are opaque to visible light. Radio waves, on the other hand, can travel through things that are impermeable to visible and infrared rays due to their longer wavelengths.

Further problems arise from the fact that some items can absorb heat until their surroundings get cooler, at which point they begin to radiate it back out. Most of these properties of heat energy are unimportant in some applications, but they must be adjusted in others.

Thermal imaging is becoming more common as an attachment for rifles and other firearms as prices drop. The goal is to acquire targets in this case, and the technology is sometimes misconstrued with night vision capacity. Scopes that are designed to magnify visible light are available. This is not the same as seeing in the dark by using thermal energy. Even in the dark, night vision requires a small quantity of visible light to function. It’s also obstructed by the same things that obstruct all other visible light.

Thermal imaging in weapons is accomplished in one of two ways: by relying on the natural heat generation of animals and other things, or by intentionally producing infrared light that is reflected off of objects in the field of view. Because an additional infrared light source coupled to the scope uses more power, a passive technique employing natural heat is suggested. It also reveals the user’s location to anyone with a thermal sensing capability. The focal plane array can absorb some heat when utilizing passive thermal imaging, and this heat can interfere with incoming rays slightly.

Certain scopes include a cooling device that lowers the temperature of the array, allowing it to pick up feeble signals from larger distances. The trade-off is a more expensive, less rugged device.

Thermal imaging is used in a variety of industries other than rifle scopes to obtain results that would otherwise be unattainable. Surveillance cameras, like some rifle scopes, use an infrared light source for illumination, resulting in finer gray scale video than is achievable with a passive system. It’s unlikely that a thief or trespasser will be carrying infrared detecting equipment in these instances. The few camcorders that are still on the market sometimes feature this technology as well.

Thermal cameras that use the passive technique use computer algorithms to create an image that depicts temperature swings as realistically as conditions allow due to the complicated interactions that occur between many heat sources. These estimates take into account factors such as ambient air temperature and wind speed. Passive thermal imaging is useful in a variety of situations because of its ability to map heat gradients.