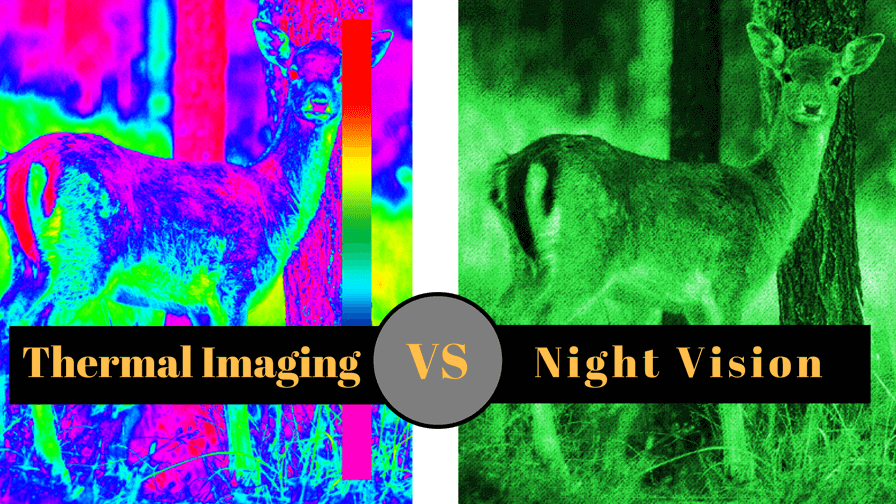 Midnight. Pitch black darkness permeates your every move. You’re a predator in search for prey, the only problem is, your eyes are deceiving you. Instead of adapting to its surroundings, our eyes simply shut down and leave us without recourse. Good thing there’s technology aiding us in the hunting game.

There are two main ways of illuminating the night, bestowing us with the power of a true predator and hunter: Thermal Imaging and Night Vision.

Today, we’ll be pitting these two up against each other, learning them in and out, siphoning every bit ofå useful information and spreading it out through this article.

Are you ready? If so, let’s begin!

There’s a couple of major differences between thermal and night vision scopes, mainly stemming from the fact of how they transmit (or if they transmit) light, their modus operandi and their usage in various conditions any individual hunter is presented with.

Let’s start with the basics.

A thermal imaging device is a relatively new addition to the hunting game. Having been mostly reserved for the army, it has recently entered the public sphere, meaning that we’re still in the grassroots stages of the technology available to us.

Here’s how thermal imagining works: Every object in this world emits some sort of heat from it, that radiation being invisible to the naked eye. Thermal imagining not only detects that heat but also the movement of that object. This means that the more heat something radiates, the more lucid it will be when looked through thermal imagining. Following that logic, it’s only natural that animate objects radiate more heat than inanimate ones and thermal imagining uses that fact to present us with a picture that highlights that object (our game).

The way it does so is by presenting it in brighter colors in comparison to inanimate objects, leaving us with a clear depiction of what is alive and what is not.

This means that every warm-blooded animal out there, including humans, is going to be picked up by the sensor a thermal imaging device has. While it won’t work on reptiles, fish or other amphibians, we don’t think any hunter wants those on the table, so we won’t list it as a con to thermal imagining.

Furthermore, what’s really great about thermal imagining is that requires no light, be it natural or artificial to generate an image for you, meaning that it can be used even the moon and stars are plotting against us.

On the other hand, Night Vision (NV) has been around for more than 70 years, first used in World War 2 as a means to spy on the enemy and their movements. Today, they are used for much noble causes, hunting being one example.

The way night vision works is quite simple but often misunderstood.

The first thing many people don’t realize is that night vision doesn’t require any sort of outside lightning source (such as the moon or stars) to work, you simply upgrade it with artificial lighting and it works like a charm.

Secondly, in order to generate a clear and concise image of your game, night vision employs the following stratagem: It sucks in light from its surroundings, amplifies it, turns it into electricity which is passed down to a phosphor screen and finally, that is turned into a clear image of your hunt.

The same thing happens naturally with animals, such as cats, that have an ingrained ‘mirror’ in their eyes, which reflects light back and works similarly to night vision. The correct term is tapetum lucidum. Now you know why your kitty is a way better natural hunter than you!

We won’t divulge into any complicated science of how exactly it is made, we’re just giving you a blueprint of what is going on and we believe that we did this topic justice enough.

Some would argue that thermal imaging itself is just a type of night vision and that they shouldn’t be analyzed separately, but we’ll keep them separated for the sake of simplicity.

Since night vision has been around for longer, there’s been a couple of generations following its evolution.

Generation 1 models were introduced during the Vietnam war and have since been used by the US forces when in places of obscured conditions.

They were very heavy, quite unreliable even with ambient light and required natural light (moonlight or stars) to even function.

Generation 2 models sought to improve on the slights of GEN 1 models, mainly the brightness as well as the clarity of the final picture being transmitted. A microchannel plate (MCP) was introduced in order to aid with the final resolution of the picture.

Generation 3 models further increased the quality of resolution, as well as the sharpness of the final picture, they also boasted longer battery life and increased durability.

For the purposes of hunting, anything Generation 2 or beyond is going to be sufficient enough for going up against game.

In contrast, thermal vision hasn’t really seen the eye of public for so long. It has seen usage outside of military operations in planes and in other jobs requiring precision, such as firefighting.

Cooled infrared detectors, as the name implies, have an ingrained cooler that is designed to keep the temperature below thirty-two degrees Fahrenheit. This means that they operate below room temperature, being able to detect almost any movement while in a hunt.

Even though they are very expensive and hard to maintain, the image they produce is crystal clear and has a resolution pairing up with night vision models. Unfortunately, most hunters aren’t going to have the budget necessary to get themselves such a model.

Uncooled infrared detectors operate on an ambient temperature basis, meaning that they might have problems with reducing image noise and the clarity will suffer a bit, but they’re still useful at their job.

Most hunters opt for uncooled infrared detectors as they are available in their budget range. They are a lot smaller and more portable than their counterpart, so they are perfectly designed for hunting.

Thermal vision scopes are usable both during the day and night, as they are the ones ‘shooting’ beams of energy onto their targets. They are not dependent on their environment and function well in almost any condition.

Night vision scopes have trouble working during the day, as the natural sunlight might damage essential components. Also, you may have to buy an IR Illuminator (additional source of lights) if the stars and moon aren’t aligned to your needs.

Thermal vision scopes have trouble with clear identification of your game. They are great for detecting motion, but you’ll never get a crispy clear image, even with higher-tier models.

Night vision scopes are all about crispy clear clarity. They produce high-quality images of your prey and you can actually see what the hell you’re shooting at.

Thermal vision scopes are still relatively new to the game and are therefore a lot more expensive than night vision scopes. Many regular models can compare themselves in pricing with high-end night vision models.

Most night vision scopes are affordable and available at decent prices. Sophisticated models might cost a few dollars more, but they’re worth every penny as they alleviate most of the cons spoken off in this chapter.

Thermal vision scopes are perfectly designed for inaccessible or hard to see through terrain. As already mentioned, they are perfect for detecting motion and can ‘see’ through bushes or any other obstacles on your way.

Since thermal vision scopes are still new to the game, only higher-end models boast any sort of durability. You’ll have to shell out a lot of money if you want a product that won’t go awry in a few years.

Night vision scopes are not only lighter but they are also more durable. They have decades of trying and testing, which allowed them to find a perfect balance between being consistent and dependable.

We deliberately avoided naming any one of these two types of scopes as the winner. We felt it would have been an unprofessional move on our part, as most hunters have different needs, wants and circumstances they are surrounded with.

In the end, it is only you that can determine what sort of model suits you better and we’ll proudly leave that choice up to you.

Are you hunting in inaccessible, low-lightning conditions? Is your prey camouflaged like a guerrilla warrior? Opt for a thermal vision scope.

Otherwise, a night vision scope will do just fine.