Home » Blog » How to Build a Trap: 10 Best Survival Traps 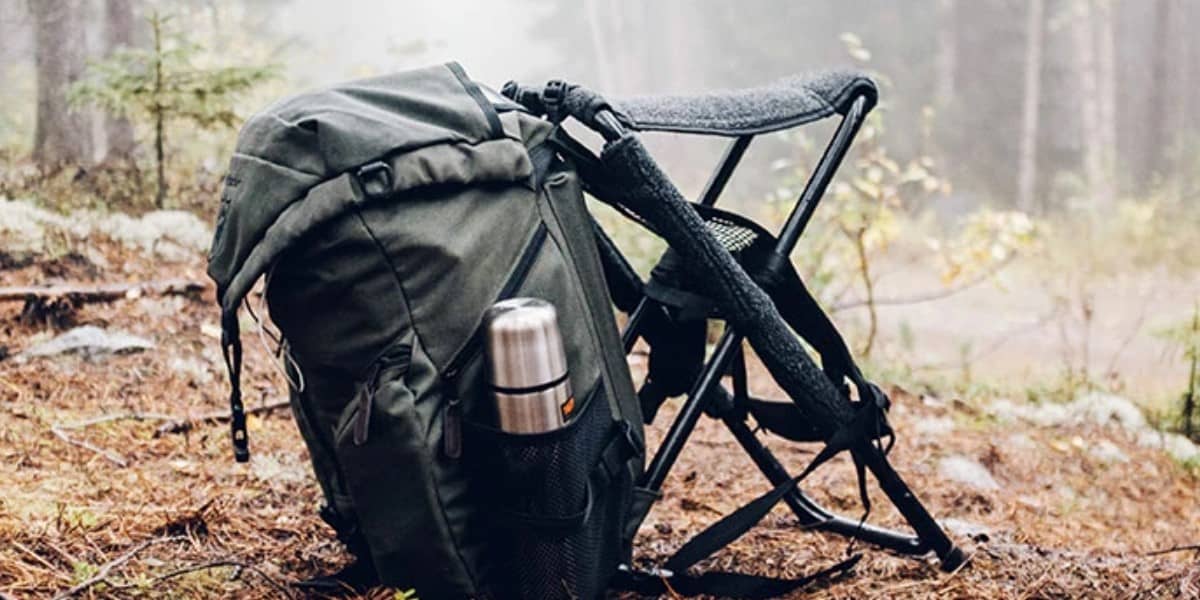 Right there in the woods, you find yourself in a survival situation; one thing that creeps into your mind is the fact that sooner or later, your bug-out bag will run dry. So getting essential nutrients such as proteins and fat becomes a challenge you must overcome to stay alive. When it’s down to getting food for survival in the wild, one cannot afford to let dietary choices get in the way of your wild edible. While you’d want to avoid sick-looking animals, you should know that almost all mammals are good to form part of your diet. However, they should be cleaned and properly cooked before consumption. You can also count on cicadas, grubs, grasshoppers, katydids, and crickets, as they are excellent protein sources.

Suppose you happen to have a rifle equipped with the best long-range scope. In that case, the problem of getting large games is half solved. If not, knowing how to make a snare and survival traps can bring you the much-needed games for your longer-term survival situation. In this article, you’ll learn how to build a trap, particularly the best survival traps to help you sustain comfortably in the woods.

Out in the wild, you come to terms with the fact that you don’t have your favorite restaurant in close proximity. In essence, when the desired becomes unavailable, the available becomes desired —a piece of wise advice you can pay for. You have to use things in the wild to cater to your nutritional needs. Survival trapping involves the use of traps and snares that needs nothing more, maybe, than being broken to a suitable length to meet your hunting demands. Every unit of calories in your body counts when there is a limited amount of food. Your primary goal is survival, and you have to be smart in your approach. It gets more manageable if you have a good 30-30 scope to see farther but when using traps you can go without it.

There are quite a lot of things you could do when it comes to survival trapping. A sturdy hunk of a branch can serve as a basic throwing stick for hunting certain animals, but we will focus on some smarter ways of getting food. The following is a list of the ten best survival traps you can quickly build out in the wild. 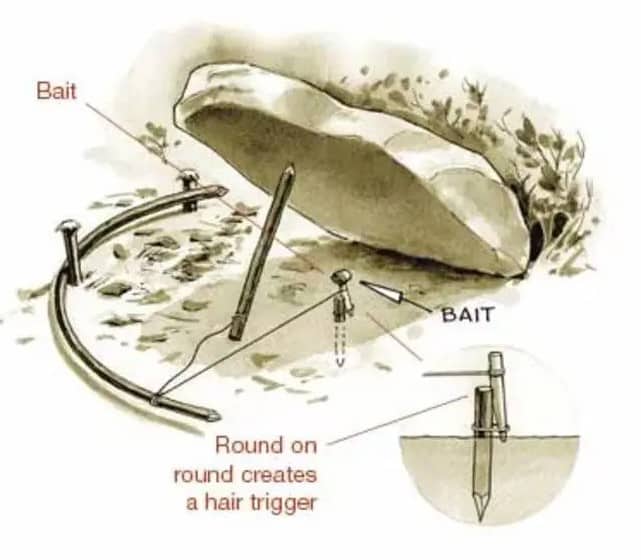 You can set up the spring deadfall trap using bulky items, such as large logs or heavy rocks, to crush an animal. Deadfalls fall under the primitive traps category and are easy to create. They employ a different strategy compared to snares. Unlike the snares, these traps, when triggered, use stored energy to crush the animal directly. Things needed for the spring deadfall trap include some bait, a two-foot length of rope, a one-foot length rope piece, a two- to three-foot spring pole, a peg, a sharpened toggle, a deadfall pole, and twine.

Start by locating two small shrubs not too far from each other. Next, fasten the head of the spring pole to those two. Now, attach the two-foot cord to the loose end of the sharpened toggle and the spring pole. Adjust your toggle such that the spring pole bends approximately two to three feet.

While the figure 4 deadfall trap requires few materials to build, it is a little more challenging to make than spring deadfall. All that is required are some bait, three sticks, and a deadfall weight, preferably a rock. All three sticks should have the same length, diameter and perfectly straight. With your knife, carve a sharp screwdriver point at one end of a stick. For the diagonal stick, carve out a screwdriver point on one end and a notch close to the other end. And, for the third stick, carve a notch on one end and a point to hold the bait on the other end. Next, place the sticks accordingly to form the number 4 shape. Square up the perpendicular post and carve a notch on the horizontal stick that holds the bait to catch the rectangular edge made on the post. Assemble the stakes such that the notches hold each other and support the deadfall weight. If everything looks good, bait your trap and let it do its thing. 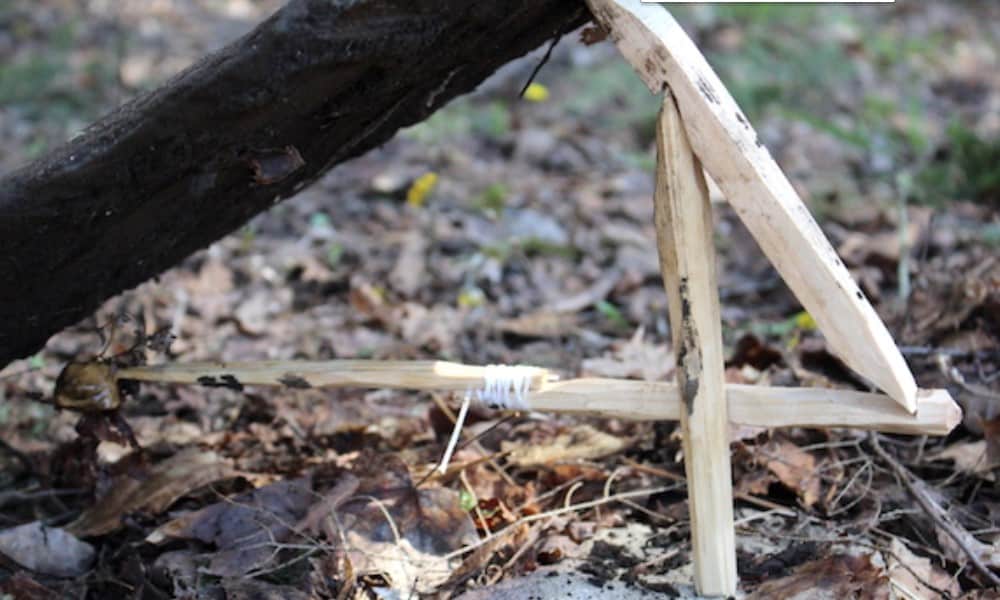 For this survival trap, you need a steel wire or a braided cable. The fixed snare has to be rigid, strong, and flexible to ensure the animal doesn’t twist and break away when caught. To make the fixed snare:

Place your snares over small-game trails and burrows where the animal lives.

Making this bait-activated trap requires a spring pole, a bait stick, some bait, a toggle stick with a diameter like that of a pencil, a snare line featuring trigger line, and a forked stake you push into the ground.

Fasten the snare line to the tip of the spring pole. Twist the pole down, ensuring the snare line catches the ground and marks the spot. Push the pronged stake into the ground at the spot you marked. Fasten the pencil-like toggle to the tip of the trigger line attached to the snare line. Next, run the toggle beneath the fork on the stake fixed in the ground, ensuring the toggle is parallel to the floor at 90 degrees to the stake. Lastly, station the baited trigger-stick out at the end of the toggle, establishing the complete trap in the process. 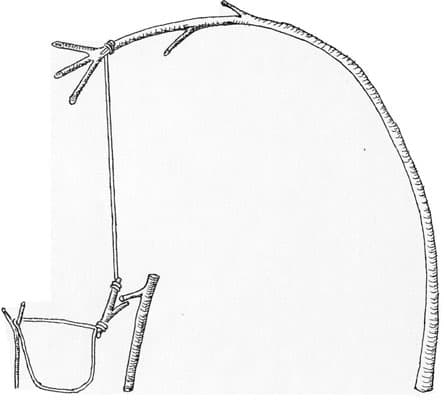 As far as survival trapping goes, this is arguably the simplest trap to build and a very effective snare trap in cold conditions. You build this by tying your snare line to a rock with a free line to fasten the float. Place the noose in a slide or run, heading directly into the water. You’d want to prop up the rock such that it falls when the loop is tugged. You can see the position of the trap and the animal with the aid of the float.

This survival trap does not require the use of bait. Requirements include a toggle, forked stake, snare line, trigger stick, and a spring pole. Place the trap close to a run or trail, fastening the snare line around the vertical trigger stick. When the loop contracts and pulls from the animal getting caught, the trap is set off by the action of the trigger stick being pulled out from under the toggle’s end.

The spring tension snare, a.k.a the twitch-up snare, is a little harder to construct than the basic noose trap. To build this trap, you need a paracord, a sharp knife, and snare wire. Start by crafting two forked wood pieces and one drilled deep into the ground with one part of the fork parallel to the ground. Fasten the other forked portion to the cordage close to the noose and place under tension from the sapling. The animal triggers the trap by pulling the noose, dislodging the forked wood in the process, and allowing the sapling to return to its vertical position.

A sticky bird trap is only necessary for a survival situation as it is termed way too cruel. You can make this trap with pine pitch or glue (if you have one in your backpack), an empty coffee cup, and bait. Start by coating the inside of the cup with glue (pine sap or pitch) mixed with bait (birdseed). The bird comes for the bait and gets its feather glued to the cup till you get to the scene.

If you are close to the river, you can get highly nutritious food with this trap. You’ll need a clear 2-liter soda bottle, a string (about two feet long), a sharp knife, and some bait. Start by cutting the top off the bottle where the cone joins the sidewalls. Make a bigger opening by cutting off the cone just below the bottle’s neck. Next, flip the cone around and insert it with the top of the code inside the bottle. Now pierce the bottle and the cone on opposite sides. Use a string to fasten the structure together with some bait inside. String up the bottle, secure it to some plant on stake buried in the mud, and wait for your catch. You can also construct a funnel from thin sticks peached together if there are no other materials around.

The fish snare employs the same technique used in hook and line fishing. There has to be a bendable sapling close to the river for this trap to work.

Instead of using a noose, attach your fishing line to the bottom of the hook trigger you carve with two pieces of wood. One part of the trigger is drilled into the ground and catches the other attached to the sapling. Place the bait into the water and wait for the fish to pull. This action dislodges the trigger and allows the sapling to back to its erect position, and pulling the fish out of the water.

A great snare trap placed in the wrong location is a bad trap; therefore, you’ll get more luck if you spend time studying animal tracks and movement. Get to learn the animal behavior to figure out the appropriate trap, baits, and location. In outdoor survival, the hunting tools and materials at your disposal can vary significantly from situation to situation. Consequently, it is crucial to try out different traps and snares to determine what works best for you. So, you can’t do without a sharp knife because you’ll be doing quite a lot of cutting and reshaping. You’ll need some heavy items for deadfalls and wire, twine, or thin rope for making snares. Remember, the wrong bait can cause the animal not to trigger the trap; hence, if your trap and snares must work, you need to use the right bait for each animal.