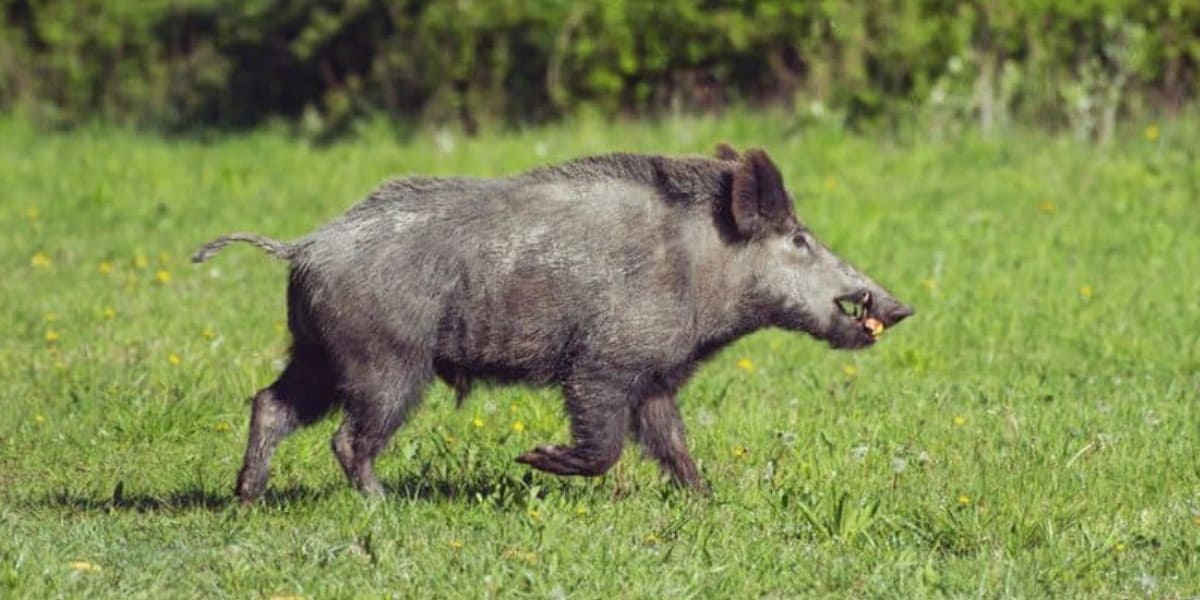 Wild hogs are built differently, and if you are a whitetail hunter, you’d need quite a bit of adjustment to shoot a hog kill shot. There are countless stories laced around feral hog hunting. The majority of these stories are associated with misplaced shots resulting in a hunter having to trace a wounded animal.

Unlike whitetails and other related game animals, wild hog vital organs are more compact and pushed further to the front. Thanks to evolution, hogs have developed bony armor and thick skin to protect their vital organs from their sharp tusks during fights. Paying attention to this body structure makes a world of difference between a wounded pig and one killed cleanly.

You want to know where to shoot a hog to get a clean and quick kill. That’s why you are here.

Fortunately, this article explains the wild hog kill zone and how to get a quick and humane kill. If you are ready, let’s dig in.

Why you should take proper shots

Due to their destructive nature, feral hog hunting is permitted all year round in many states across the country. So it’s pretty much understandable if you are a deer hunter looking to fill up your freezer with pork during the off-season. However, an animal with two oversized ears, a big nose, and quick feet is never a pushover—something many hunters fail to understand.

Feral hogs are headstrong, unpredictable, and feature anatomy that differs from that of deer. Not knowing the best place to shoot a hog could cause a lot of trouble to the hunter and the animal.

We’ll discuss the dangers of poorly placed shots later in the article. For now, let’s focus on why you should take proper shots.

Ethical hunting calls for clean and humane shots that kill the game animal without suffering. The crucial reason hunters should strive for ethical shots is to take home better quality meat. Here’s why.

A stressed or frightened game animal just before death tastes bad and gets spoiled quickly. The pork industry has an annual estimation of over $270m in accrued losses resulting from pork thrown away due to pre-slaughter stress and fear.

Unfortunately, when an animal is stressed or scared before it dies, its body releases adrenaline, a process that takes up glycogen. This implies a shortage of lactic acid postmortem. What we have as a result is tasteless, tough meat with high pH. This type of meat does go bad faster than unstressed meat.

Let’s establish the fact that hogs are hard to kill. Many new hunters struggle when hunting feral hogs due to the positioning of the animal’s vital organs. Consequently, shot placement and caliber selection play critical roles when hunting. A well-placed shot in any of the animal’s vitals will result in a quick death. Usually, a firearm chambered in .308 win mag. is ideal for a hog kill shot. You’d want to get to the best of your weapon by using the best scope for a 308 bolt action rifle. The .30-60 is one of the deer hunter’s favorite calibers but works well for killing hogs. When used with 30 06 rifle scopes, it is deadly, powerful, and accurate for a humane kill. 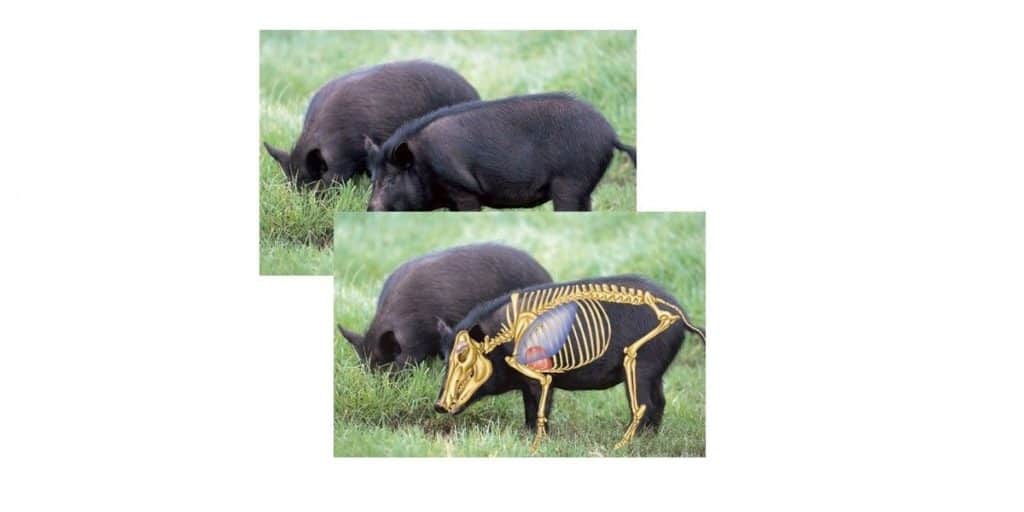 Having the right shot placement brings about a clean kill, quality meat, and not chasing a wounded pig. It is as crucial as hog hunting itself. Here we’ll take a look at the hog’s anatomy and the best hog kill shot locations.

Shots in the Heart

The heart remains the best organ to hit when hunting hogs. The hog’s heart and lungs are built such that they overlap at a single spot. This presents an easy target for a kill shot—skill and the right weapon matters when aiming for the heart of a hog. A perfectly placed heart shot must be in the region just behind the head and above its shoulder. The need to continually search for food and hunting pressure makes wild hogs more of a nocturnal animal during the peak of hunting season. Heart shots are usually a bit challenging during these hours. Consequently, one must be properly outfitted with lights and appropriate hog hunting gear.

The hog is an intelligent animal with a relatively small brain, thick hide, and skull. The hog moves its head rapidly as it digs and feeds, making it difficult to establish a headshot. While a shot in the head is likely to kill a deer on the spot, it is not always the case for hogs, given their tiny brain, thick hides, and skull.  However, the proper firearm in the hands of a skilled hunter who boasts accuracy can establish a quick kill shot, and a follow-up shot should there be a miss. With a front-facing boar, you’d want to shoot in between its eyes (where the brain lies) to produce an instant kill.

As mentioned earlier, hogs are constantly moving their heads, and shooting at its ear hole could be tricky. But in a situation where you find a stationary boar, shooting directly into the ear hole will result in an instant kill.

Now let’s look at the different hunting scenarios when chasing feral hogs in the wild.

Hunting from a Hide

Hunting from a hide is an effective strategy for establishing a hog kill shot. Here, you get the opportunity to shoot at an animal that’s either moving slowly or at a spot. You have better aim at the vital areas, and a well-placed shot will lead to death instantly.

Hunting with a Shotgun

Many hunters swear by their shotguns as they are easy to carry and effective at bringing a hog down in its tracks.

With just a few modifications and shooting modern high-powered slug loads, your 12 or 20 can serve as more than a decent hog killer. Most hunters use their shotguns for turkey hunting, and switching to hog hunting will require some slug load and optics adjustments, then you are good to go.

Hunting with a Rifle

Most hog hunters are deer hunters using the same rifle for both animals. Fortunately, any deer rifle and bullet combination is perfect for hog hunting.

Feral hogs travel in small groups, leaving ample hoofprints on the ground. Effective hunting is usually during dusk and dawn as they are most active at these times.

Where to Hit a Running Hog

It’s always best not to spook the hog you intend to hunt. This way, you can confidently bury a bullet into its vital organs.

However, in the event that you have a running hog, then skill and experience of shooting at a moving target become crucial. As for the moving hog, you should target its vital zone instead of its vital organs. You’ll have to see the lead to make up for your shot placement. The amount of lead you give is dependent on the speed of the animal.

Tips for a Successful Hunt

For a successful boar hunt, there are some hunting strategies to consider. Hunters can hunt wild pigs using three hunting methods: Spot and stalk, stand hunting, and dog hunting. Hogs are witty and will fight back, given a chance.

Here are some tips for a successful hunt

Poorly Placed Shot. What Can Happen

A poorly placed shot will bring about a handful of events. First, a shot to the hog’s intestines will kill the animal but not instantly. The hunter will have to trail the wounded hog to recover it. The most common scenario is a shot to the leg/hooves. This won’t kill the hog but will give it a lifelong disability.  Feral hogs are extremely dangerous wild animals. Their upper and lower tusks wear against each other, making them incredibly sharp. With lightning speed and razor-sharp teeth, a wounded hog can charge towards the hunter and inflict serious injuries.

States like Texas with an alarming population of feral hogs will persuade you to take hogs on private and public lands. But this does not imply you approach these smart creatures unprepared. If you are a deer hunter with little to no hog hunting experience, you may not know where to shoot a boar. Hence, your chances of returning home with a kill are very slim. However, considering the hog shot placement chart, tips, and instructions above can considerably increase your odds. You really don’t want to see a wounded pig charging towards you. Therefore, as a hunter chasing a very unpredictable animal, you want to be ethical in your approach. This way, the animal is killed in its tracks with minimal suffering while you remain unharmed.