Home » Blog » Shooting with One Eye Open or Two? Which is Better? 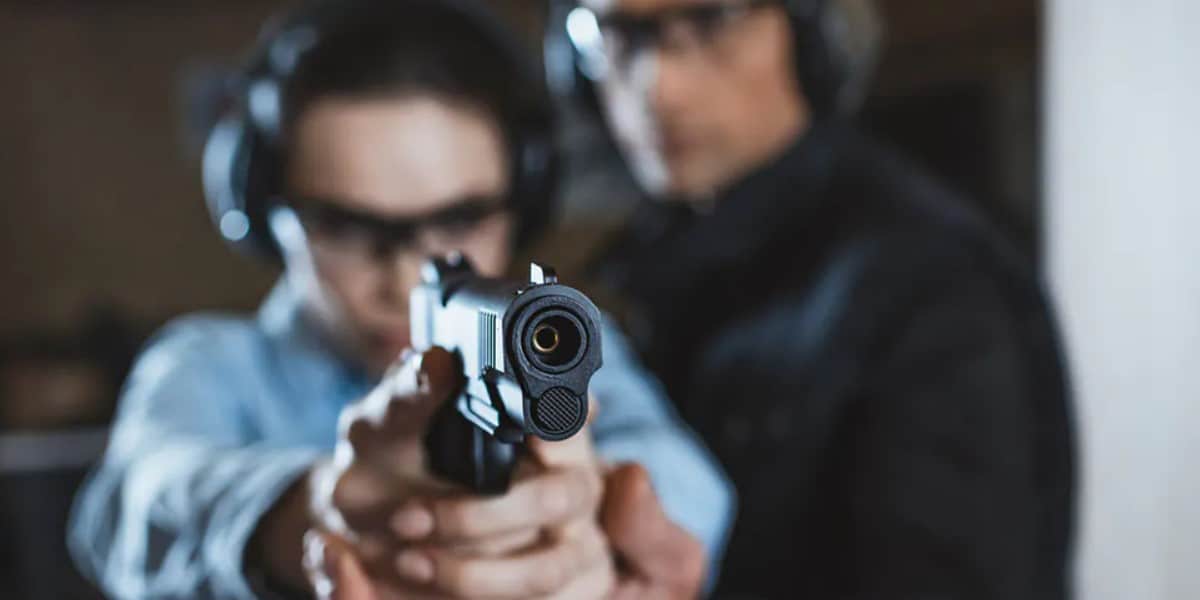 Do you close one eye when shooting? Should you shoot with both eyes open? These and more are some of the questions that have remained unsolved in shooting ranges and elsewhere.

If you are a beginner, you could be forgiven for having one of your eyes shot to attain added focus in the other eye. The concept of closing one eye to take shots has always been a subject of debate. Judging from the fact that the world-renowned Jessie Harrison has amassed countless world titles by shooting with one eye closed, you may be tempted to shoot just like she does.

However, shooting with both eyes open is crucial when situational awareness is a must, as seen with expert shooters.

If you are looking to fatigue less and attain balance when taking shots, you should embrace shooting with both eyes open. This article will teach you just how to do so. Let’s dig in.

Why should you shoot with both eyes open instead of one

Sharpshooting instructors are known to train their students on how to excel shooting with their non-dominant eyes closed. While this is a crucial skill when a sniper is in a prone position and out of sight from the target, it is not particularly useful when there are hostilities in close proximity.

In a desperate situation, a shooter will experience physiological and physical changes in the body. The human body is designed to enter the fight or flight” mode triggered by a surge in adrenaline when there is a perceived danger. The most notable physical changes include increased heartbeats, dilation, and widening of the eyes. These developments enable the shooter to handle the situation effectively.

As the changes occur, the shooter will have difficulties when attempting to shoot with one eye closed.

As far as tactical shooting goes, having one eye closed implies you are deprived of half your field of view, potentially leaving you at the mercy of your attacker.

The Science Behind Your Eyes and Eye Dominance

It’s imperative to know which of your eyes is dominant if you must improve your shooting skills. The dominant eye test is the first test instructors carry out on new students.

Contrary to popular beliefs, the dominant eye does not have better vision than the non-shooting eye. It, however, provides a bit more information to the primary cortical region of the brain than the other eye.

The non-dominant eye offers added information that the brain uses to ascertain depth perception, speed, and distance. Should the dominant go deficient or impaired, the brain reconfigures the other eye to take over its role.

Eye dominance is similar to handedness and varies from person to person. While they are associated, the two are not related.

You can conduct a handful of simple tests to determine your dominant eye. If you are ready, let’s go!

In this test, you’ll establish your dominant eye using your index finger.

Pick an object in front of you to serve as a target. This could be a picture on the wall or a book on the shelf.

With both hands, point at the object with your hands intertwined and both index fingers together. Your target should remain at the center of the triangle formed with your hands.

Now have your left eye shut. If the object remains a center, you are right-eye dominant, but you are left-eye dominant if it moves out of the center.

Hole in a Card Test

Obtain a rectangular card and make a hole in its center. The hole should be about 1.5 inches (4 cm) in diameter.

Choose a distant target to fixate the card on.

Knowing your dominant eye gives you the needed edge while shooting. It helps you to confidently optimize your head’s position to increase your accuracy. However, shooting could be difficult if you have cross dominance. Being cross-dominant implies that you are a right-handed person with a dominant left eye or vice versa.

There are a handful of factors to consider when shooting. For this article, we will focus on one telling aspect: the shooter’s field of view. Shooting with both eyes open implies that you have a wider visual field, increasing your accuracy to a large extent.

While your firearm and having a both eyes open scope are crucial, aiming and acquiring your target plays a massive role in any shooting application.

For long and short-range shooting, you’d want your field of view to be clear and visible when aiming at your target.

By shooting with both eyes open, the dominant eye will focus on the front sight, while the non-dominant eye provides added information for better awareness.

More often than not, rookie shooters ask, “why should you aim with your dominant eye? “The short answer is this simply “accuracy”.

The dominant eye provides most of the information your brain needs to take out targets with a clean shot.

In addition to determining your dominant eye, you must consider the following factors to achieve uniform accuracy when aiming.

A shooter does not need magnification when taking close-range shots as it results in a smaller field of view; thus, acquiring the target becomes difficult. While there are magnified scopes for short-range shooting, a red dot (non-magnifying reflector) sight remains the most preferred choice for short range shooting applications.

However, long range rifle scopes are one of the shooter’s most invaluable gear in a far-distance shooting. They offer comfort and enable the shooter to hit targets with ease.

Pros and Cons of Shooting with One Eye Open

Pros and Cons of Shooting with Both Eyes Open

Tips for Shooting with Both Eyes Open

Just as you wouldn’t walk around your house or drive a car with one eye closed, you shouldn’t be shooting with one eye closed. If you are looking to become a better shooter, it’s recommended you learn to shoot with both eyes open. Here are a few tips to get you started.

Dry firing is a great way to start something you are not used to in the range. Start with safety first at all times by double-checking if your weapon is unloaded.

Next, set up your targets about 12ft apart.

You may use a chamber dummy round if you are skeptical about dry firing your gun.

Now draw, aim, and dry fire your gun at the targets multiple times with both eyes open. You can always use a shot timer to enhance your skills.

Don’t be surprised; shooting with both eyes open causes the double-vision effect. As you practice dry firing, you’d want to maintain focus on your dominant eye as your brain teaches the non-dominant eye to follow suit. It’s only a matter of time before you get used to it.

Shooting with one eye closed has its upsides, but having both eyes open when shooting is better. You get to maintain balance, have superior situational awareness, and shoot for more extended periods without stress and fatigue. A lot depends on the shooter when contemplating whether to shoot with one eye closed or not.

Everyone can learn to shoot with both eyes open. It could be tough at first and requires consistent practice, but with the right firearm and the best vortex scope in hand, the results are always overwhelming.