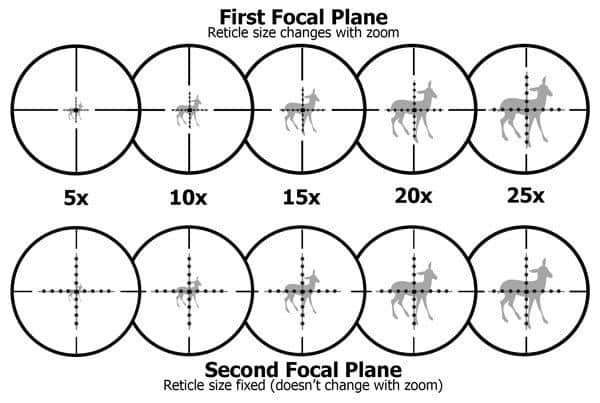 Choosing the right equipment for shooting is almost as important as putting in the time to practice and master the skill of shooting. There are few places that’s more true than with your scope, but new shooters may be confused by one particular design option in particular: the focal plane.

There are two different kinds of focal planes available in scopes, and both can have a significant impact on your shooting accuracy and range. While this detail doesn’t actually affect the magnification, accuracy, or clarity of your scope, it does affect your technique while shooting.

Equally important, using first focal plane or second focal plane scopes can affect what information you have before you pull the trigger, and what kinds of mental calculations you need to make sure you’re on-target and safe to fire.

In this article, we’ll talk about first focal plane vs. second focal plane in terms of the differences between the two, how they impact long-range shooting, and which options are better for what kinds of owner.

What Is A Focal Plane For Shooting?

The first thing you need to know to decide whether you want a first focal plane, or a second focal plane scope is what the focal plane is in the first place.

The difference has to do with the reticle, and where it’s placed in the scope. The reticle are the lines on the scope that help you aim, usually a horizonal and vertical line, sometimes with inch measurements marked.

That usually means that second focal plane scopes either provide less information (like the inch marks sometimes included on first focal plane reticles), or that that information is only accurate at a certain magnification.

Both of these scope styles have advantages and disadvantages, but they can have a particular effect on long-range shooting.

Second focal range scopes are the older of the two designs and are what most people think of when they think of a scope’s target. They’re even the most common scope design replicated in video games and online shooting simulators.

However, second focal range scopes have a few limitations for all that familiarity. For one thing, the scope’s accuracy depends a lot on the magnification and distance. You’ll need to mentally account for the range you’re shooting at and adjust accordingly, and the inch marks on the reticle will only be accurate at a specific magnification.

You can check which is the best long range rifle scopes.

But, since second focal range scopes always have the same looking reticle, you don’t necessarily need to adjust your magnification as often. A skilled shooter will be able to make a lot of the calculations needed mentally and can rely on getting the same amount of information from the reticle at all times.

Some scopes light the reticle, or at least the center point, to make it easier to see at any magnification, but even that can cause problems by making it harder to focus on the target at low levels of magnification.

Experienced shooters can use both styles of scope and make them both effective for almost any scenario, but for long-range shooting many people prefer first focal range scopes for the speed they offer when figuring out how to adjust for distance when they’re taking the shot.

Choosing between the two styles of scope is a personal decision, but one you should take seriously. There are a few different things you should consider before you invest in a scope, especially if you’re looking at high-end scopes that provide powerful magnification and high accuracy.

Do you have a good sense of distance and the size of things? Long-distance shooting always requires some amount of adjustment for the distance between you and your target, and the weather conditions, especially wind. If you consistently know the distance between you and the thing you’re shooting and know what your reticle measurements mean at different distances, a second focal plane scope might work well. If you tend to rely on your scope’s reticle for information about the size of things at a distance, a first focal plane reticle, where the inch markings are always accurate, may be a better choice.

What kind of scope are you used to? You can always get accustomed to a different kind of scope if you need or want to, but there are advantages to using the same kind of equipment you’ve used in the past. Any time you change scope styles, and sometimes even just manufacturers, you’ll have to get used to the differences between the new scope and your old one.

Choosing a scope is about a lot more than just the focal plane. It’s important to remember to look at how the scope it adjusted, its range and magnification, magnification settings, and other details before you decide. It’s also important to remember that high-quality scopes tend to offer crisper, clearer sights than more affordable options, which makes it easier to be accurate.