Home » Blog » What Scopes Does The Military Use 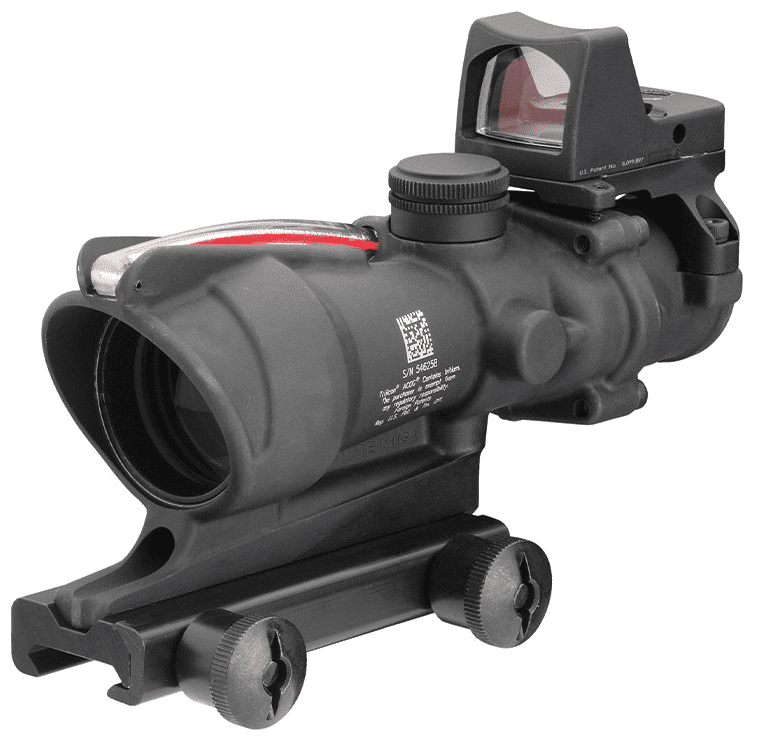 When you’re building a rifle, no matter what platform you choose, one of the most important decisions you make for the build is going to be what type of optics you’ll install on the gun. Your scope choice will determine not only how quickly and easily you can acquire your target, but how effectively you can engage them at your current distance.

It’s no secret that civilian gun enthusiasts have absolutely gobbled up any and all military-style or military-grade guns, accessories, attachments, and everything else made available to them. During a rifle build one of the first questions you may ask yourself when planning out your setup is, what scopes does the military use.

This is especially pertinent if you’re building or modding on a platform like the AR-10 or even the AR-15, which is a kissing cousin of the legendary military staple, the M4. But if you were looking for a single answer, we’re here to disappoint you a little bit, because there isn’t a standard military scope, there are several.

What Scopes Does The Military Use?

Depending on the branch, the unit, and the mission or duty requirement, there are quite a few different answers to this. Even in cases where similar or even identical scopes are used for a particular application, the service members will frequently have them specifically geared and tuned to the exact purpose and role they need to fill. The short answer is that the military will use one of several ACOGs, or Advanced Combat Optical Gunsights, on the M4 or alternately the M16A4.

All scopes currently used by the US military are manufactured by Trijicon and have been in use since 1995. The first sight that is in military use, and arguably the one most widely used at the time of writing is the Trijicon TA31RCO ACOG with 4x magnification and a 32mm objective lens. The Trijicon TA01NSN is another ACOG utilized in limited engagements. Another scope used is the Trijicon 3.5×35 SU-258/PVQ Squad Day Optic.

The Trijicon TA31RCO is a 4×32 ACOG that is used by the majority of the US Army, US Air Force, and the Marine Corps. It is known as the M150 Rifle Combat Optic while in the service of the Army, and as the AN/PVQ-31 Rifle Combat Optic in the Marine Corps and USAF.  The scope uses specially designed tritium and fiber optic illumination on the ballistic compensating reticles. It is commonly found on the M4 and the M16A4. The Trijicon TA31RCO is currently equipped on every service carbine in the USMC.

The Trijicon TA01NSN is part of the Special Operations SOPMOD kit or Special Operations Peculiar Modification kit. It is a 4×32 ACOG that forgoes the fiber optic illumination and uses only tritium illumination with iron sights for backup. This is most frequently used by special operations personnel that need to customize their riflescope to the exact requirements of the mission as well as personal shooting preferences. The Trijicon TA01NSN has a special ranging reticle that compensates for drop out to 600 meters without any additional adjustment.

The Marine Corps leverages not only the Trijicon TA31RCO AN/PVQ-31 Rifle Combat Optic but the Trijicon 3.5×35 SU-258/PVQ Squad Day Optic as well. This scope is another fixed ACOG that is fielded on the M27 SAW assault rifle and is used for engagements at a variety of ranges from close quarters to mid-range and beyond. It features a quick detach mount, flip-up lens covers, and dual illuminated sight with either a red horseshoe or amber dot reticle.

What Makes Trijicon Scopes So Good?

In short, they were initially chosen and remain to this day the most-used scope in the field across most branches of the military, because they provide unbeatable target detection, acquisition, and identification while being always on and always ready for the situation at hand.

The majority of Trijicon ACOG scopes do not need batteries and instead leverage a combination of the fiber optic & tritium illumination. This technology uses available light to automatically create the most optimally visible reticle possible. In cases where the specific scope does require a battery, it uses a single, common, AA battery to operate the 6-level illumination settings.

In the field, the lenses on Trijicon scopes have unmatched clarity and definition. The glass is coated to prevent damage and to maximize the light-gathering abilities of the optics, and they are battle-proven to withstand the recoil and shock from rounds up to a .50 caliber BMG round. The waterproof design and near elimination of moving parts create a scope system that is combat-ready and just about indestructible.

What Is The Bindon Aiming Concept?

The Bindon Aiming Concept, or BAC, is a method of increasing shooting accuracy based on the natural binocular vision of the average human being. Glyn Bindon was the founder of Trijicon who realized that by using an illuminated reticle, the zero between two different shooters could effectively be made the same, even with natural variances in binocular vision.

The major discovery was that by properly illuminating the reticle, the shooter’s dominant eye would automatically track it, while the subordinate eye would process the background and other surroundings. The result is the modern illuminated ballistic reticle that allows the shooter to operate, acquire, and identify targets, all while keeping both eyes open. Keeping both eyes open is the cornerstone of effectively maintaining crucial situational awareness.

Three primary scopes essentially dominate US military usage, and while they aren’t cheap, they certainly are the best at what they do. The best part is, they are so versatile out of necessity, that you can apply them to just about any build or use case.

This means that whether you’re building something on a popular AR platform, or even something a little less common, you have several incredible options for optics if you want to stick with proven military-grade performance.