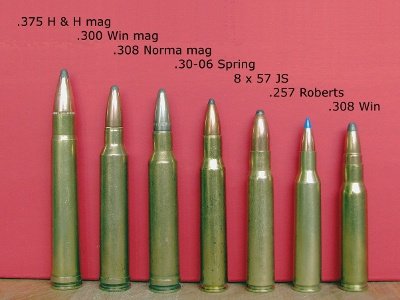 When you’re heading out into the field to go after big game, you need to know that what you’re carrying can handle it. Arguably, cartridge size is the most important thing for hunters to take into consideration, apart from the act of the hunt itself. One of the longest running debates for any hunter is ‘.30-06 vs. .300 win mag’.

Both the .30-06 and .300 Winchester Magnum (sometimes written .300 win mag or .300WM) have been popular for years, for good reason. They’ve got great muzzle velocity, letting hunters hit their target with great speed, often at great distances. But, any skilled hunter will tell you that this isn’t the only thing that matters in a hunt. We’re going to cover all of the factors that you need to know about when choosing the right ammunition for your next hunt!

What’s a Cartridge, and Why Does it Matter?

Cartridges are the pre-assembled ammunition that you can buy at a sporting goods store. A cartridge consists of the bullet, propellant, and ignition primer in a single metal case. When people are debating two types of ammunition, they’re almost always debating cartridges, rather than the bullet that’s being fired from the cartridge. The way that cartridges are packed and assembled leads different ammunition to behave differently from others.

Before we can really get into the specifics behind each cartridge, let’s consider the origin of both.

The .30-06 is a much older cartridge than the .300 win mag, being developed originally in 1906. Its name is actually a combination of the bullet diameter, .308, and the year it was developed, ‘06. It was developed by the US Army for use in the bolt-action Springfield rifle, looking for better accuracy as the arms of other countries developed as well.

The .300 win mag was developed by Winchester in 1963. It was developed to be a high-powered magnum cartridge, satisfying the needs of long-distance marksmen and hunters alike. The cartridge quickly gained popularity, skyrocketing it to where it’s at now.

Both of these cartridges are very similar in size. When you break it down, each has the same bullet diameter of .308 inches. That’s not the only exact similarity between the two, however. The overall length of each is the same as well.

Each cartridge uses a different parent casing. The .30-06 uses its own .30-06 Springfield casing. The .300 win mag uses a .375 H&M Magnum casing, though. This makes a big difference between the two in terms of measurements. Check them out below:

All of the above measurements make a big difference when it comes to the ballistics of each cartridge. With a longer case length, the .300 win mag is able to house more grains per cartridge. This is going to increase performance of the cartridge in terms of ballistics alone. Let’s take a look at each, one more time.

As you can see, the .30-06 is capable of holding less grains than the .300 win mag, and as a result the max pressure created by firing the cartridge is lower. This lower pressure results in slower speeds, and less distance. If you’re going to be taking longer shots, the .300 win mag is going to provide better performance. We have a guide on the best scopes for .30-06. Performance isn’t all about speed and distance, though. This is especially true when you’re hunting. Handling of a rifle comes down to many different factors, but one of the most important may be recoil. Recoil can make or break your next shot, and can mean the difference between going home with a deer or going home empty handed.

Naturally, a cartridge that’s got more gunpowder creates more speed. However, when you’ve got a bullet that’s exiting the barrel at a very high velocity, you create more backwards force, or recoil. You probably know where this is going. The .300 win mag has a higher grain capacity, meaning that it creates more explosive force than the .30-06, and more recoil. If you need a round that’s going to create less recoil, you’ll want the .30-06 cartridge.

We’ve already touched base on this, but it’s important to reiterate it. The .300 win mag has more gunpowder per cartridge, creating more pressure, and as a result higher velocity. To put this into perspective, though, let’s talk about the actual speed of each cartridge.

On average, .30-06 cartridges allow the bullet to travel at speeds of about 2,800 feet per second. This is on the higher end, sure. However, the .300 win mag allows for much faster speeds, with the average bullet traveling at 3,100 feet per second. This means that it’s going to travel further and faster, with the difference being pretty significant.

Trajectory is a factor that is largely dependent upon velocity, as well. A bullet’s trajectory is a measure of the distance that a bullet can fly accurately before experiencing diversion or dropping. When you’re choosing a cartridge, your trajectory is vital for the range at which you can accurately take shots at your quarry.

The faster that a bullet can travel, the better its trajectory over distance. This means that the .300 win mag is the clear winner in this category. It cuts through the air faster, allowing it to avoid diversion or dropping over short distances.

When you combine all of these factors, you can start to get a picture of the overall accuracy of a cartridge. While some marksmen may disagree, the performance of each cartridge is going to have an effect on the ability to remain accurate. This is especially true of newer shooters, or shooters who are smaller. This can be attributed to recoil alone, with higher recoil having a more noticeable effect on smaller shooters.

When it comes to the abilities of the average marksman, the .30-06 is going to be easier to maintain accuracy with in most cases. That being said, it starts to lose its accuracy at longer distances. This makes it ideal for mid-range shooting or hunting. The .300 win mag is going to increase accuracy at longer ranges, but only if the shooter is honed in their skills.

The preferred cartridge for most elk hunters is the .300 win mag, not surprisingly. Elk is big game, meaning that the need for a powerful cartridge is a must. Because the cartridge allows for higher velocity, it allows for higher penetration, as well. You want your bullet to be able to rip through the game you’re shooting at from any distance.

It should be noted that in most cases, elk have to be hunted from a greater distance than something like whitetail deer. They’re far more sensitive to being hunted, and they’re much larger. With bigger muscles and a more finely tuned set of senses, these animals will bound away at the first sign of humans. You need distance to hunt elk, and for distance you need to use the higher performing cartridge. In this case, that’s .300 win mag. Check which is the best scope for .300 Win Mag.

What’s the Ideal Use of Each Cartridge?

Both of these cartridges are an excellent choice for shooters. It really comes down to what you’re looking to accomplish, though.

Between the two cartridges, .30-06 is the better all-around choice. It’s going to outperform .300 win mag at shorter distances, while being able to dip its toes into the longer ranges that you may need. If you’re looking for something that’s easy to handle, and can take down pretty large game at a mid-range distance, opt for the .30-06.

If you’re heading out to hunt, and you know you won’t be able to come close to your prey, opt for the .300 win mag. This cartridge is going to give you better performance at longer ranges than .30-06. This means that you won’t have to worry about the bullet reaching your target. You’ll also have less to worry about when it comes to diversion from wind, too.

The last thing to consider, which we skipped over, is the weight of the cartridges themselves. This isn’t something that affects the overall performance of the cartridge, but it may affect the performance of the shooter. Between the two, .300 win mag is considerably heavier. If you’re at the range, that’s not a big deal. However, if you’re out in the field, this weight will be noticeable the longer you’re carrying your rifle and ammunition. Take that into consideration. Regardless, though, .30-06 is going to be great for all around use, while .300 win mag is going to be better suited for longer range shooting. As always, stay safe, and happy hunting!